Why is Leachate from Landfills of Concern?

Landfill leachate is formed when rainwater infiltrates and percolates through the degrading waste.

The pathways of escape from landfill to causing environmental damage discussed are:

When considering the second of these it is worth noting that the second type may occur even if the leachate is managed, if at any time the quantity treated does not keep up with the amount created. Over a period of time the excess leachate will build-up and once the leachate level exceeds the perimeter height, there will also be leachate escape.

A lot of the different materials that end up in landfills contain substances hazardous to the environment that are eventually released and seep into the soil and groundwater.

These substances are major hazards to the environment and they can persist for many years, before being flushed out by natural water movement.

For example, think of electronics such as computers, batteries and televisions that get thrown out and end up in landfills. These products contain substances like arsenic, acids, lead and others which eventually end up in our environment and pose threats to public health.

Mercury is another toxic substance that frequently appears in landfills. It comes from fluorescent light bulbs and poses major health risks.

Inhaling even a small amount of mercury vapour can harm our kidneys and cause respiratory failure. via hcr-llc.com

The fact is that just about anything can end-up in landfilled waste.

The more dangerous substances are seldom thrown away in bulk into today's well-controlled landfills. But, the fact remains that small amounts do find their way in, and these “trace substances” can be highly dangerous to higher life (fish, mammals and man). This is true even if just a few parts per million are present from for example domestic battery disposal.

This is particularly of concern if these “traces” are found in drinking water. Most drinking water comes from either river abstraction. Of of groundwater from wells and boreholes.

Sample bottles like these filled with leachate were analyzed for contaminants of emerging concern (CECs) including pharmaceuticals, industrial chemicals, household chemicals, steroid hormones, and plant/animal sterols.

In this US national-scale study, scientists provided an assessment of CECs in landfill leachate disposed offsite that has undergone treatment or storage processes (final leachate) at landfills across the United States. It was done to gain a greater understanding of this potential contaminant source to the environment.

Contaminants of concern (CECS) were found in all landfills tested, and numbers of CECs are rising as more electronic and electronic waste gets into landfills.

To better understand the composition of contaminants of emerging concern (CECs) in landfill leachate, fresh leachate from 19 landfills was sampled across the United States during 2011.

A total of 129 out of 202 CECs were detected during this study, including 62 prescription pharmaceuticals, 23 industrial chemicals, 18 nonprescription pharmaceuticals, 16 household chemicals, 6 steroid hormones. And, 4 plant/animal sterols. CECs were detected in every leachate sample. The total number of detected CECs in samples ranged from 6 to 82 (median = 31).

Scope Of The Study Re: Sampling Network Results

In the study, final leachate samples from 22 landfills were collected and analyzed for 190 CECs including pharmaceuticals, industrial chemicals, household chemicals, steroid hormones, and plant/animal sterols.

Landfill leachate is characterised by high organic and inorganic pollutant concentrations, and is extremely toxic to the environment. The significant impacts of landfill leachate could be:

Due to its high toxicity, landfill leachate is a major threat for aquifer and surface water health status if it enters either.

The exact chemical composition of landfill leachate depends on waste composition, climatic conditions, and the age and degradation rate of the solid waste.

The major problem in landfill leachate treatment is the extremely high concentrations of ammonia and organic nitrogen (Bulc, 2006; Lavrova and Koumanova, 2010). via sciencedirect.com

Various treatment methods (physicochemical and biological) have been used, but [unless designed by experts with long-standing experience] they have high operational cost, or they produce dangerous by-products.

Regrettably in some cases, over ambitious designers and easily persuaded clients create leachate treatment plants which end-up being both costly and never work correctly, until later re-built or abandoned.

When water percolates through waste, it promotes and assists the process of decomposition by bacteria and fungi. These processes in turn release by-products of decomposition and rapidly use up any available oxygen, creating an anoxic environment.

In actively decomposing waste, the temperature rises and the pH falls rapidly with the result that many metal ions that are relatively insoluble at neutral pH become dissolved in the developing leachate.

The decomposition processes themselves release more water, which adds to the volume of leachate.

Leachate also reacts with materials that are not prone to decomposition themselves, such as fire ash, cement-based building materials and gypsum-based materials changing the chemical composition.

In sites with large volumes of building waste, especially those containing gypsum plaster, the reaction of leachate with the gypsum can generate large volumes of hydrogen sulfide. When released in the leachate it can cause odour problems.

It may also form a significant component of the landfill gas. If so, flaring must be by very efficient complete combustion or else a large odour problem can occur. A danger also exists that staff may be made ill or even killed by the toxic effects of even low concentrations of hydrogen sulfide in air.

The physical appearance of leachate when it emerges from a typical landfill site is a strongly odoured black, yellow or orange coloured cloudy liquid.

The back and darker leachate colours generally indicate the leachate is young leachate from the acetogenic phase of decomposition.

Leachates of a whiskey-like colour are usually older leachate which has undergone anaerobic digestion (decomposition without air (oxygen)). This type of leachate is called methanogenic leachate and often turns cloudy if shaken with air in a bottle.

The smell of acetogenic leachate is acidic and offensive and may be very pervasive because of hydrogen, nitrogen and sulfur-rich organic species such as mercaptans.

How Leachate Escapes Of Concern Occur At Older Landfills

In older landfills and those with no membrane between the waste and the underlying geology, leachate is free to leave the waste and flow directly into the groundwater. [If the landfill perimeter is over-topped the leachate may also drain into surface watercourses.]

In such cases, high concentrations of leachate contaminants are often found in nearby springs and flushes.

As leachate first emerges it can be black in colour, anoxic, and possibly effervescent, with dissolved and entrained gases. As it becomes oxygenated it tends to turn (cloudy)  brown or yellow because of the presence of iron salts in solution and in suspension.

If a leachate collection system fails (or the Leachate Treatment Plant stops working), leachate levels will slowly build in a site. Eventually it may even over-top the containing membrane and flow out into the environment.

Thus, what appears to be a stabilised and inactive site can become re-activated and restart significant gas production and exhibit significant changes in finished ground levels.

One method of leachate management that was more common in un-contained sites was leachate re-circulation, in which leachate was collected and re-injected into the waste mass.

This process greatly accelerated decomposition and therefore gas production and had the impact of converting some leachate volume into landfill gas and reducing the overall volume of leachate for disposal. via wikipedia.org

Approaches Taken By Landfill Designers To Limit Concerns About Landfill

Location restrictions are often imposed upon the sites chosen for landfills.

These ensure that landfills are built in suitable geological areas away from faults, wetlands, flood plains or other restricted areas.

These include a flexible membrane (i.e., geo-membrane) overlaying at least two feet US (or 1 metre Europe) of compacted clay soil lining the bottom and sides of the landfill.

They are used to protect groundwater and the underlying soil from leachate releases.

Leachate collection and removal systems, and designed to sit on top of the composite liner and remove leachate from the landfill for treatment and disposal.

Closure and post-closure care requirements are used to allay concern about the effects of leachate on the environment, include:

Corrective action provisions may be enforced by the environmental regulator to control and clean up landfill releases and achieve groundwater protection standards.

Financial assurance—provides funding for environmental protection during and after landfill closure (i.e., closure and post-closure care). via epa.gov

Conclusion To: Why Is Leachate From Landfills Of Concern

Landfill leachate can be contained with a  well-designed landfill for a long period of time.

It can be removed for treatment and the contaminants disposed of responsibly.

Nevertheless, there are many legitimate concerns about landfill leachate.

In fact largely due to this, EU policy, in common with support from many of the world's environmental experts, has resulted in a policy that landfill will only be used for the small amount of waste which remains after recycling. It is the final resort after failing to have recycled a material. 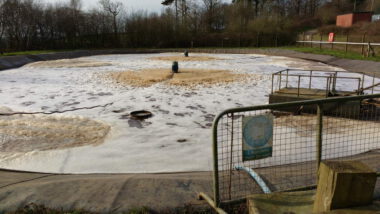 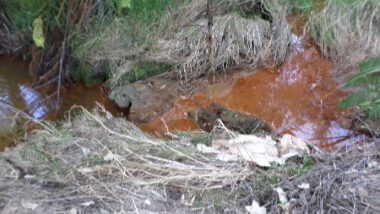 Effects of Leachate on Groundwater

“Leachate-Treatment.com” is a participant in the Amazon Services LLC Associates Program, an affiliate advertising program designed to provide a means for sites to earn advertising fees by advertising and linking to amazon.com.
3 Shares
Tweet
Share
Pin
Share3