Denitrification is a microbially facilitated process where nitrate (NO3−) is reduced and ultimately produces molecular nitrogen (N2) through a series of intermediate gaseous nitrogen oxide products. 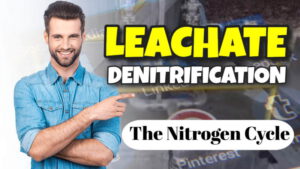 Facultative anaerobic bacteria perform denitrification as a type of respiration that reduces oxidized forms of nitrogen in response to the oxidation of an electron donor such as organic matter. The preferred nitrogen electron acceptors in order of most to least thermodynamically favorable include nitrate (NO3−), nitrite (NO2−), nitric oxide (NO), nitrous oxide (N2O) finally resulting in the production of dinitrogen (N2) completing the nitrogen cycle.

Denitrifying microbes require a very low oxygen concentration of less than 10%, as well as organic C for energy.

Since denitrification can remove NO3−, reducing its leaching to groundwater, it can be strategically used to treat sewage or animal residues of high nitrogen content. Denitrification can leak N2O, which is an ozone-depleting substance and a greenhouse gas that can have a considerable influence on global warming.

In nature, denitrification can take place in both terrestrial and marine ecosystems.. Typically, denitrification occurs in anoxic environments, where the concentration of dissolved and freely available oxygen is depleted. In these areas, nitrate (NO3−) or nitrite (NO2−) can be used as a substitute terminal electron acceptor instead of oxygen (O2), a more energetically favourable electron acceptor. Terminal electron acceptor is a compound that gets reduced in the reaction by receiving electrons. Examples of anoxic environments can include soils, groundwater, wetlands, oil reservoirs, poorly ventilated corners of the ocean and seafloor sediments.

Denitrification can lead to a condition called isotopic fractionation in the soil environment. The two stable isotopes of nitrogen, 14N and 15N are both found in the sediment profiles. The lighter isotope of nitrogen, 14N, is preferred during denitrification, leaving the heavier nitrogen isotope, 15N, in the residual matter. This selectivity leads to the enrichment of 14N in the biomass compared to 15N.

Moreover, the relative abundance of 14N can be analyzed to distinguish denitrification apart from other processes in nature.

Denitrification is commonly used to remove nitrogen from sewage and municipal wastewater.

Aerobic denitrification, conducted by aerobic denitrifiers, may offer the potential to eliminate the need for separate tanks and reduce sludge yield. via wikipedia.org

Denitrification is a process ubiquitous to all our terrestrial and aquatic ecosystems and occurs in tropical and temperate soils, in natural and intensively managed ecosystems, in marine and freshwater environments, in wastewater treatment plants, manure stores, and aquifers. It is a beneficial process in removing nitrate (NO3) from wastewater, but has a negative effect in removing valuable nitrogen fertilizer from the soil and releasing the greenhouse gas N2O and the tropospheric pollutant NO. This article summarizes current knowledge on the groups of microorganisms involved in denitrification, the environmental conditions required for denitrification to take place, and how we measure and model denitrification rates. via sciencedirect.com

The Importance of Denitrification to Return Nitrogen to the Atmosphere

Denitrification also occurs when oxygen is present, as has been shown for several isolated bacterial species and also in natural aqueous habitats and in soil. Normally, under oxic conditions denitrification is repressed by inhibition of nitrate transport through the cytoplasmic membrane. The sulfur bacterium Thiosphaera pantotropha (now Paracoccus pantotrophus), in the presence of oxygen, expresses a periplasmic nitrate reductase that is not dependent on nitrate transport through the cytoplasmic membrane and can thus take over the first step in denitrification. The last enzyme in the denitrification reaction chain, NOS, is oxygen-sensitive in many species.

Therefore, aerobic denitrification is often incomplete and an increase in N2O formation has been observed when conditions switch from anaerobic to aerobic.

Denitrification, the stepwise reduction of nitrogen oxides, has profound influence on primary production rates in terrestrial ecosystems as well as atmospheric chemistry. This review discusses some of the most common denitrification quantification techniques and the circumstances under which they are best applied.

One reason is the potential of the denitrifying process to alleviate environmental impacts of NO3− in ground- and surface waters via the enzymatic reduction of NO3− in stream sediments, constructed wetlands, riparian buffer strips and biological sewage treatment plants.

Nitrogen, the most prevalent element in Earth’s atmosphere at 78%, can be found in living organisms and decaying matter like humus in soil, as well as in the air we are breathing right now.

Nitrogen is considered a vital limiting nutrient, which means that in nature, it typically is the nutrient in shortest supply, so its supply regulates growth. On the negative side, an overabundance of nitrogen in water, called eutrophication, can cause toxic algal blooms that choke waterways and interfere with water treatment and desalination operations, and pose a threat to human health. Eutrophication can be caused by fertilizer runoff and sewage discharge, among other factors.

Even on its own, an overabundance of nitrogen in drinking water is toxic to humans, especially infants and pregnant women. It is a risk factor in methemoglobinemia, cancer, and diabetes.

Because of health and environmental dangers, denitrification is an important wastewater treatment because it converts a dangerous contaminant into a benign gas that can be discharged with no environmental impact. via fluencecorp.com

“Leachate treatment by nitrification is a term often heard when discussing biological leachate, but what exactly is meant by this, and what is good about it, and what not so good?”

Leachate treatment by denitrification is a process which is carried out as a stage within biological aeration treatment of leachate.
By definition, it can only take place after nitrification, and the purpose of denitrification is to convert nitrate in solution, which is produced during the preceding nitrification stage, to nitrogen and water. The beauty of this reaction is that these by-products are harmless when discharged into the environment.

It is a wonderful way to return nitrogen, which would otherwise be at risk of polluting the environment, back into the atmosphere which already comprises large quantities of nitrogen, harmlessly.

The first point in support of leachate treatment denitrification is going to be that as already hinted, this is a very clean and sustainable biological reaction. it is one of the very few reactions which a water treatment plant process designer can use without there being any by-products which might then go on to give unwanted side-effects or need costly disposal.

A second point in favour could well be that leachate treatment denitrification as a stage of treatment after biological aeration (nitrification) treatment will enable the nitrification reaction effluent, which would otherwise be unsuitable for a watercourse discharge, to be discharged safely.

The 3rd positive point is that low rate denitrification can usually be achieved within an SBR process by adding an additional anoxic stage to the cycle of operation of the plant, in conjunction with suitable nutrient chemical addition in the cycle.

A fourth big benefit is that some reduction in the concentration of a number of other contaminants will occur a the same time.

Lastly, the 5th point is the effluent is far less likely to cause algal blooms in downstream waters.

And on the reverse side, for balance, the Con side, against:

The primary point against leachate treatment denitrification is costly.

The 2nd point against is going to be it requires the expenditure of additional energy.

3rd point against is going to be it requires the addition of additional dosing chemicals.

Your fourth point against is the process requires careful control to achieve the desired effects.

5th and ultimately, last point in contra is going to be the benefits of nitrogen removal may not be enough to warrant the expenditure of the money it costs.

That is it, the good qualities as well as the cons, the points in favour and the points against.

Both questions seem to have a “yes” answer! Leachate treatment denitrification is a mixture of good and bad which shall on occasions be the best leachate treatment option… It is left up to you, the reader to decide which side, the good or the bad, outweighs the other one… 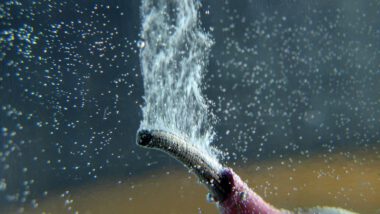 “Leachate-Treatment.com” is a participant in the Amazon Services LLC Associates Program, an affiliate advertising program designed to provide a means for sites to earn advertising fees by advertising and linking to amazon.com.
1 Shares
Tweet
Share
Pin1
Share